← more from
Napalm Records
Get fresh music recommendations delivered to your inbox every Friday.

Where Fear And Weapons Meet 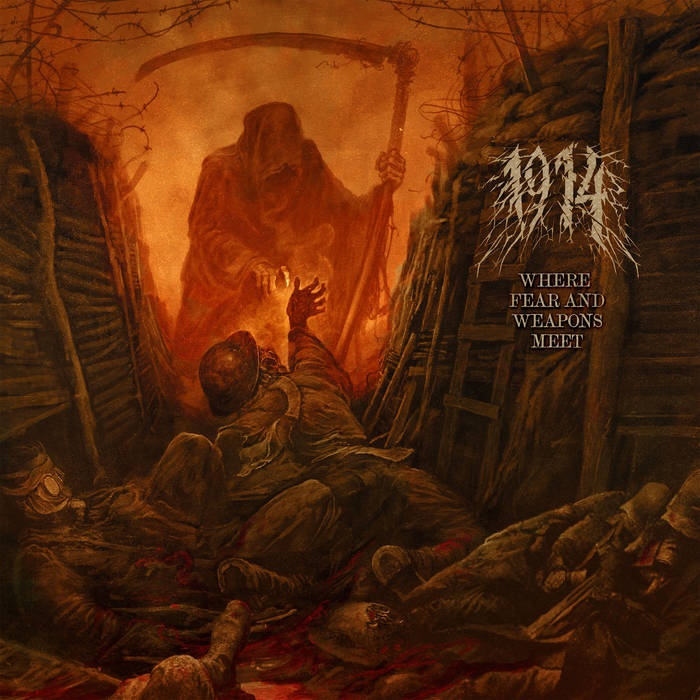 Old Man Doom Like the Great War itself, it's brutality is laid out in the growls, the riffs, and the emotion in another release by this band. Truly another Masterpiece.

Holdeneye 1914 was already one of my favorite bands after two stellar WWI-themed records, but their third opus Where Fear and Weapons Meet takes it to a whole new level. The very definition of heavy, both musically and thematically, this album is simply one of the very best things I’ve heard all year.

Ippocalyptica As the always on-point David Fischer noted, this album will be on many AOTY lists, and the two available tracks make this an absolute no-brainer of a pre-order. 1914 could very well have created their masterwork here. Very few extreme metal bands produce albums about war that are as thematically and musically cohesive and impactful as what 1914 creates, and we are blessed as a result. More specific thoughts to follow on 22 October!

hallowedhalls [stoked for this release]

David Fischer The veterans are back! Not pre-ordering this was never an option.
The album further augments the sound of 1914, adding orchestral elements and presenting even more sublime songwriting. The result is as breathtaking as Cyberpunk 2077 was promised us to be: HUGE choruses, exquisite drama, high emotion and - again - a pulverizingly heavy concoction of doom, black and death metal with a pinch of sludge and bagpipes. As predicted, a serious contender for AOTY lists, I expect to see it on a lot of'em. Favorite track: Don't Tread on Me (Harlem Hellfighters).

existential_claustrophobia We have been keeping a keen ear out. Let's rip the top off this one and get straight into it.

"Ukrainian blackened death/doom metal offensive 1914 continue to reflect the gruesome tales of World War I, its soldiers’ fate, their death, fear and feats to be never forgotten, and unleash their new opus, Where Fear and Weapons Meet, on October 22nd, via Napalm Records. Its eleven tracks of pure historic harshness follow up to the band’s sophomore full-length, The Blind Leading the Blilnd (2018), and debut, Eschatology of War (2015), both highly acclaimed amongst critics, and create a sophisticated variety of massively brutal blackened death metal accented by dramatic and realistic audio soundscapes and disquieting melodies spiced with the approach of sludge and doom!

Unlike their previous works, Where Fear and Weapons Meet is not about death, but about life. Most of the heroes and protagonists in the songs survived war, became heroes and finally returned home. Even the album cover emphasizes this: Injured, shell-shocked and bleeding, the only survivor of a shield attack is holding his hand out to death, praying in agony, but death does not take him away. He deserved to live and death gave him life. Packed with a great deal of knowledge, the lyrics attend to the fate of individuals that exemplify the cruelty of war and countless other stories. 1914 break into their third offering with the intro “War In”, summed up by final “War Out”, and immediately build a common thread to the previous records. “War In“ is the original of the most famous Serbian song of the Great War period, “Tamo Daleko”. Like World War I, the album begins in Serbia and continues on the first track from the prospective of Gavrilo Princip, who assassinated Austrian Archduke Franz Ferdinand and his wife on June 28th, 1914 in Sarejevo and caused the outbreak of World War I.

What happens next is an intense, in-depth analysis of historical events, like for example – The Battle of Vimy Ridge, shameful pages of the British Empire history in the track “Coward” featuring Sasha Boole (Me And That Man), The Battle of Messines on “Pillars of fire”, and the infantry regiment, the Harlem Hellfighters, on “Don’t Tread On Me”. Massive “...and a cross now marks his place” features Paradise Lost vocalist Nick Holmes and tells of the death of private A. G. Harrison, who was killed in action on May 20, 1918, and about his mother hearing the terrible news of her son never coming back. To depict the story in the most authentic way, 1914 used text from an original letter from back in the day, without any major changes.

Authentic forces like ambient sonic war samplings transport these stories even further into the present and make Where Fear and Weapons Meet another heavily intense and deep-reaching output that will grant 1914 even higher appreciation than the five-piece is already credited with."

Bandcamp Daily  your guide to the world of Bandcamp